It seems appropriate to start with a ‘Hello world’-style triangle:

Ever since details of DirectX 12 began to surface, I became interested in learning about it as most of my recent programming has been done through C# rather than C++, and the last time I worked with DirectX was very briefly with version 11 which had more of an emphasis of creating an abstraction layer above OpenGL/DirectX than an actual engine and prior to that, DirectX 9.

My main problem was hardware capability as my 2009-released AMD 5870 was simply not compatible with DirectX 12, but after purchasing a GTX 970 the opportunity arose, bundled with a two week holiday off work which was particularly motivating as already doing 40 hours of full-time programming a week reduces my appetite for after-hour hobby code projects. Fortunately it’s now been two weeks since I’m back at work and I’m still going. 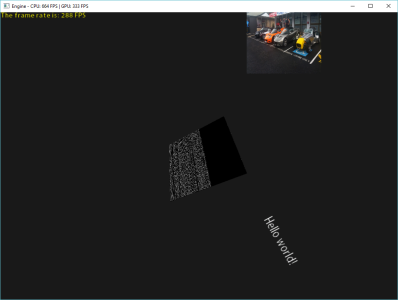 This is the current state of the project. Visually it’s not very exciting and if anything makes me look awfully novice at any rate. Right now I’m putting most of my effort into developing a solid back-end that is capable of dynamically allocating resources when I request them, taking advantage of DirectX 12’s parallel capabilities where possible.

The latest feature implemented is the text renderer, which has the ability to either render to screen space or to world space. When rendered in screen space, it remains the same size when resizing the window and any transformations applied are done consistently through a Transform class object which is overridden for 2D positioning.

Buffers are particularly unique in this case, where I try to pool as much data as possible for a low frame overhead. In the above image there are three objects – 2 “squares” and 2 text objects. All are combined into a single index buffer, single vertex buffer and have each reserved a single constant buffer slot.

At the risk of overextending this post and allowing for future updates I’ll leave it at that, and rather than just posting about any progress I might go into further detail on some in-depth rendering techniques in the future as well.