I had a bit of play with streaming services today and was interested in getting Netflix working on a media server I’ve got set up. After some confusion, tinkering and satisfaction everything was eventually working. The only problem was that now Australian based streaming services were no longer available.

A workaround was to manually edit the DNS address on the device, but doing this with a TV remote isn’t the most sophisticated of methods. The next idea was to simply point the DNS address to the router and have that changed, much faster on a computer. There was still the repetition and problematic approach of having to log in and fetch one of the two DNS addresses aside from trying to memorise them. 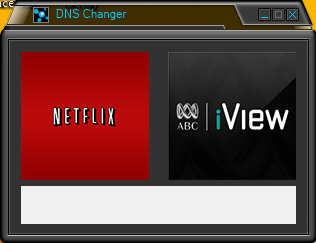 The solution ended up being a little C# utility, which would log into the router automatically and perform the necessary changes using the built in features of the WebBrowser class using a very simple 2 button interface. All I got to do now is fire up the program, hit the show I want to watch and after the router resets I’m good to go!

It’s interesting to program something that not only works but actually solves a real-world practical problem to make life easier. Here’s hoping there’s more where that came from.