As I mentioned a couple of days ago, I’ve started on an RTS project. I’ve always enjoyed RTS games, since I’m particularly fond of systems that allow you to upgrade things or purchase stuff with your virtual earnings. On the other side I’ve always been terrible at RTS games so I never play them online either!

Moving on to the actual development there isn’t much to go on right now. Every night for the past week  or so (Apparently the project folder was made on the 14th) I’ve been working on the game for a few hours, in quietness and occasionally with some music to inspire the mind – in total that’s quite a number of hours already, and I have indeed completed a fair number of systems.

In terms of actual RTS gameplay, there is absolutely nothing yet. I’m developing the core systems which are nearly done and are progressing nicely. At the same time I’m occasionally taking the time to experiment with some things, such as attempting to model my own buildings (I’m not at all creative, as you’ll soon see) or creating a nice little terrain to work on. 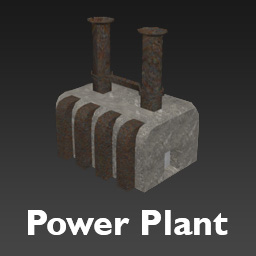 The texture work may just be the worst part, as I literally slapped some seamless Google images on – I’m reasonably happy with the mesh itself considering I don’t model at all – of course it’s a placeholder :).

For reference, tonight I’ve pretty much overhauled my placeholder terrain, added a power plant model and building file, a fair number of miscellaneous code changes I’ve written up in the versioning system – Definitely not skipping backups this time! Finally, I’ve generated a navmesh, which isn’t really a real accomplishment seeing as I’m using the built in Unity navmesh tools and haven’t actually utilized yet. However I’ve left it until now as I’m finally reasonably content with the systems in place and want to move on to producing the first unit tomorrow, which may very well just be a cube for now, hopefully at least a placeholder free model.

As I’m developing quite a complex project and I haven’t started really that long ago, there really isn’t anything exciting to show. I’m going to keep the post short so I don’t run out of things to say and also don’t turn the post into a giant wall of text. I’ve got some really exciting systems that I’m quite proud of so definitely expect more soon!