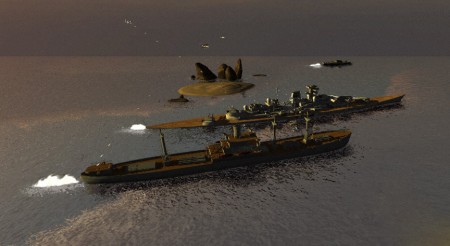 The Bismarck and a merchant ship fire on some fighter planes. DoF was off so the bullets could be seen better in a still-frame, unfortunately this deteriorated the horizon blending.

All ships now have the ability to open fire on planes that don’t belong to their own faction, therefore the player now has to be careful when to use his reinforcements (or to use them at all if they’re up for a challenge).

I fixed a huge performance issue that was caused by me creating very large spherical triggers around both fighter planes and ships to detect other units, and instead have replaced this system by scanning the scene for game objects with certain ‘tags’ applied. If these tags are found, a raycast is used to determine if these objects are within a certain range, and if so they are filled with lead. 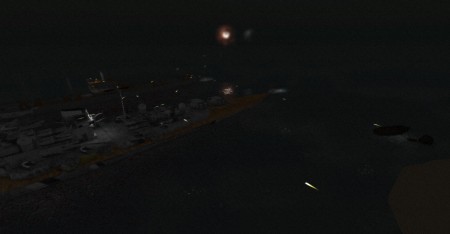 Glow-in-the-dark splash effects are no longer present and now obey the environment light.

It’s quite surprising that near the end of the game there are still 0 animations used. Absolutely none. My next goal is to get soldiers done, and those are going to be awful without animations. Fortunately I’ve familiarized myself further with some handy modelling tools I’ve got laying around.