A nice rotating radar effect as well as countdown marks the finish of the support plane interface.

The interface as well as the programming of the support planes is done. All that’s left in the category of these planes is to have them killed off again by boats. To do this I’m going to add points on all the ships that supposed ‘AA’ fire will come from. This will add some of the difficulty back in and assures that the player can’t just complete the missions from reinforcements as for every plane destroyed, one less will return (which fortunately resets after every mission).

Unfortunately my bug list is almost getting bigger than my to-do list at the moment. First there’s the howitzer bug, then there’s the planes not turning correctly (despite the above screenshot looking correct, it’s one of the rare moments it’s doing what it’s meant to). Yeah there’s only two bugs but my to-do list isn’t very large either. I’ve spent a few hours now on the plane banking but unfortunately have come up with no solution, so worst case scenario, planes won’t rotate particularly realistically and I might add it in later during an update.

Speaking of the to-do list, I have been messing around in 3DS Max and have somehow learned how to rig a model. I’d have a screenshot but unfortunately the program crashed after I applied stupendous amounts of effects and other unnecessary stuff to the 3DS Max scene. I have so far ‘rigged’ it, which means I can pose the character in the position I want but I am not sure yet how to actually get animations into Unity, although it seems pretty straight forward so I’ll just try a few things here and there. 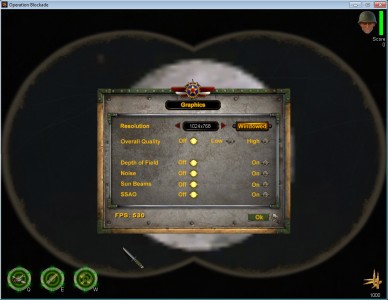 User Interface items remain crisp regardless of graphics options set. (The moon in the background is just low resolution, textures don't look that bad on those settings)

It’s already becoming a big boring wall of text but I’m not done yet! I mentioned that the interface was having texture quality problems when the player ran at low settings. This was due to the interface of the game being treated as textures rather than GUI items, and now that I’ve changed that this should fix that issue as well as significantly increase the quality of these interface items.

There’s a series of things that I work on between posts, some small and some big, that I don’t actually mention. It seems quite pointless posting a changelog every post unless I’m releasing patches to an already released game, so I’ll hold the temptation and continue as normal.