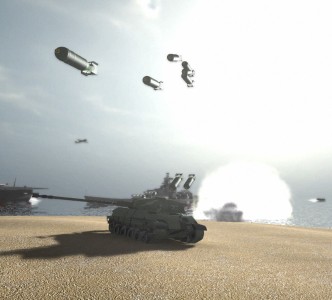 Using the enemy's "intelligent" AI against itself has its benefits.

Well the Tiger 2 is done, and as it curiously grazes the island for bunkers to shoot at it often becomes the victim of my placeholder V1 rockets and bombers that I’ve set up very close to the island at the start of the game for testing purposes. Right now the bombs are creating a physical force which has a rather amusing effect on the tanks, resulting in them flying all over the place which I’ll later transform into a damage radius rather than a force radius.

I’ve had the idea of creating some sort of fast-motion recording of me creating a unit, just for fun, while allowing people to see what I’m doing. I’ll probably skip the modelling since I make so many mistakes it’d make no sense to watch me go back and forth. Right now the Tirpitz is nearly done (yay another Bismarck-resemblance, less work) so I might use that!