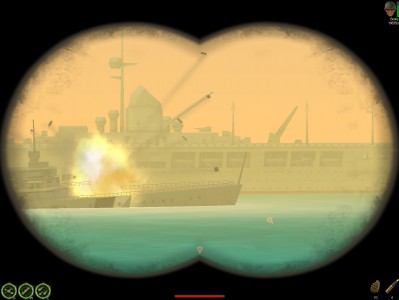 The original Zepplin, next to a slightly more unfortunate Hipper heavy cruiser.

So here we have the Zepplin. I mentioned in the last post that it wouldn’t take long to program the aircraft launching code, which I’m still fairly confident in. What I didn’t mention, as I didn’t realize for a moment how many turrets it has, is how long it would take to set up each one individually. The code for it is handled by the ship’s AI, and is a simple 2 minute copy paste job. What isn’t so simple and quick, is the entity placement. Each gun has to have its variables connected and this has to be done by hand. Last time this happened was with the Hipper, which has 10 turrets. The Zepplin actually has 17, 12 always facing the player. This might take me quite a while, so the Zepplin might be one of those rare ‘2 day’ jobs rather than the ‘1 unit a day’ I’ve been able to keep up with so far.

The Zepplin, currently having the AI capabilities of a brick.

Right now it isn’t programmed to do anything, so it sits there patiently, even ignoring anything fired at it. Programming it like the other ships only takes around 5 minutes, as it uses the base code of the little torpedo boat.

There’s a few more things I’d like to mention besides the aircraft carrier here. First up is the shadows. The Unity engine’s shadows are nice and all, although they’re quality is directly affected by the distance they are placed. In my case, this isn’t that much of a problem, as the player only really sees shadows up close, and therefore all shadows look soft and sharp. However, the downside of this is that the ships do not cast shadows onto their own decks, and if I do allow this the shadows on the player’s island become slightly chunkier. I’ll decide closer to the releases which method I’ll use.

Secondly, both planes and ships have the ability to attack support aircraft that the player is able to request once in a while. Right now, in my version I don’t really have the support aircraft added in yet, but neither do I have any code on any ships or aircraft for them to attack these aircraft. I don’t imagine it would be too difficult to do but it’s going to be fairly time consuming having to back through almost every single unit so far to make them a little more intelligent.

Other than that, good progress so far!