Another unit done! This time it’s the Z.31 Class Destroyer. A lot of the boats and planes aren’t exact replicas of the original models as I’m having a hard time finding the exact same 3D model resources, blueprints, etc. but I’m at least giving them the same properties. They require the same amount of hits, they have the same amount of guns and they serve the same purpose. 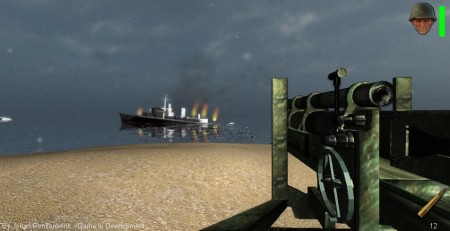 Here is the Z.31 Class Destroyer after I plucked off its four guns one by one with the Howitzer, and then finished it off with three consecutive shots. Each fire trail is coming from the point of the turrets, although a little repetitively right now. Maybe I should show future units when they aren’t half destroyed, so you can actually see their features.