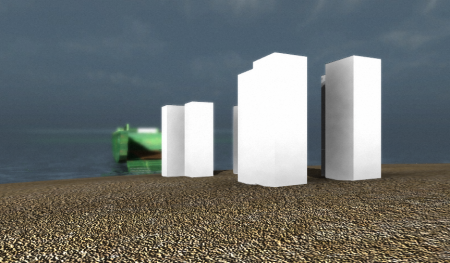 Today I worked on the soldiers and integrating them with the landing craft, which all works well. The soldiers are placed within the craft as sub-objects therefore following all its movements and rotation until the ship is ready to unload. Then the soldiers are replaced with individual soldiers at their original positions and start marching onto the island. There’s 8 soldiers – 6 infantrymen and 2 mortar soldiers. They strafe, they shoot, and everything works. I still have to add firing delays and some slight work to the mortar crew for their final look, as right now I still need to replace those fearful cubes of mine.

Next up are the tanks, including the landing craft for those. This time I don’t have to design any more unique system (except for landing craft traffic jam avoidance) and should be done in roughly the same timeframe if not sooner. Instead of cubes I’ll try to use actual models this time.

As you can see in the picture I’m also using some post-processing effects, all already integrated with the engine and working real-time. I don’t think I’ll be using the depth of field effect in the final game as distantly approaching enemies become difficult to see, although for photographing development progress I think it looks pretty nice, even on these cubes!