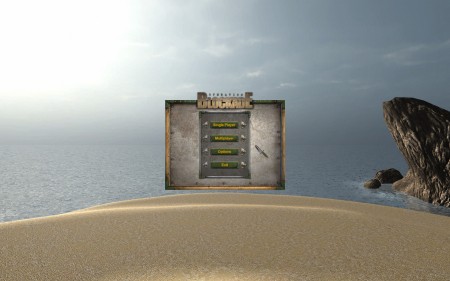 Just like the original menu, it slowly spins around the island and as an addition, I’ve added a graphics settings screen which updates the scene in real-time very smoothly. Although a menu is probably not the most exciting feature to hear about, it really adds a sense of completion to the game and it allows it to make some sense.

The only actual menus working right now are the main one shown above, the options menu (with General, Graphics and Sound sub-menus) and the graphics menu. The multiplayer button is likely to remain inactive for quite a while until the rest of the game is entirely finished.

I spend the entire day getting the animations for buttons to play properly, and everything functions exactly as the original game. Although by ‘entire day’ I mean four hours due to lack of sleep last night, but it’s still a fair bit of time.