Since my blog isn’t looking so intense and action packed this month I guess it’s time for another post! I was actually quite tempted to write a nice article about my particle rendering engine that ran using a very, very flexible data driven plugin system (aka support for scripting/modding).

Unfortunately, all three sources of back-ups are gone from my project files. First I whiped an entire 2 terrabyte hard drive, which was basically the main location of my most recent files, then a solid state drive failed which, as it was in a RAID volume at the time could not be recovered. And finally, my USB became so unbearably slow I couldn’t seem to transfer to or from it anymore, which is rather disappointing, so please forgive me for the lack of images in this post.

I did at some point post an image of it, however this is from a fairly early version, probably the moment I only got particles working. 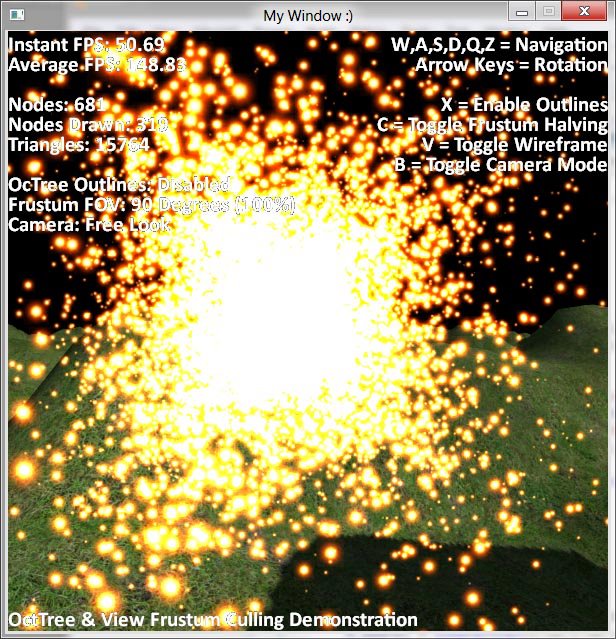 It was a nice system, rather than using point sprites which was all that was required I decided to use triangle lists (in a somewhat simplified English version, I took control of the particles rather than them being automatically created somewhat) and after figuring out how to turn them into billboard sprites (make them always face the camera) I had a funky system of very customisable particles!

Anyway enough about the particles, I doubt they sound interesting after three paragraphs. I passed all my courses this trimester, believe it or not, and that means I’ve passed my first year. Surprisingly with some very colourful and bright grades (How I got a distinction for a math subject is beyond me).

Next trimester, from what I’ve gathered from the nice folk at QANTM who are teaching me I’m doing a group project. What I’d really like to dive in to, which I somewhat did by making my particle system data-driven, is possibly even further that into an external tool that allows designers that I’m allocated with to add content to the game without a single line of code. This isn’t something I’ve done before so it should be interesting.

The downside of the group project is that, with the current students I’m most likely being put into a group of 5-6 designers, and some animators and artists, with me being the only programmer. Inevitable conflict, but oh well.

Earlier this week was quite an interesting experience. I performed focus testing for SEGA Studios Australia with a friend of mine who I dragged along, as well some on-going contract work for a separate party. That’s literally as much as I’m allowed to say, since I’ve signed my first few contracts (Man, I feel so professional and capitalist-like!)

In the hope of not creating an incredibly boring series of posts, with paragraphs that no one would be willing to read I’m going to end it here, hopefully with some more exciting and visually-appealing content for my next post which again, hopefully isn’t too far in the future. Most likely a new iPhone game that I’ve been working on for roughly 2 months now, give or take a few days of delays, that should be ready for release early January.