Alright, so I want to make progress, and will put some effort into getting the last few things done. I’ve now done 2 out of the 5 things I’ve put in a list before, although there’s two extra things bugging me. Let me just revise that list:

The support aircraft are my next priority, and they are the following aircraft that I managed to find in the original game’s folder:

When the second (and third) version of these planes are unlocked throughout the game is unknown to me and I’ll choose my own suitable time to ‘replace’ them during the storyline.

I’ve put a question mark after map as it seems more mission specific so it’s barely on the list in the first place. Alright, so two things. Plane banking, aka the planes turning as they turn, needs to be added. This isn’t a difficult feature, but it needs be done. I’m just adding it in there in case it turns out to be some time-consuming process due to me not figuring out quaternions.

The Howitzer bug has been there for a while, pretty much since I’ve added it in. I’ll just go into a bit of technicality here; The Howitzer uses a separate object to the player’s camera as it made of multiple parts that are not supposed to turn up/down or left/right. All other weapons are part of the player camera’s hierarchy for simplicity and because it works. Because of this, the Howitzer requires a separate script to move it around, using the camera as its origin. This works fine, however when recoil is applied to some weapons, regardless of giving both mouselook scripts the exact same values, appears to offset the Howitzer, as well as the pause menu being opened the howitzer tends to shoot past the camera’s direction sometimes. This is unlikely to be that difficult to solve although it has been a time consuming bug. 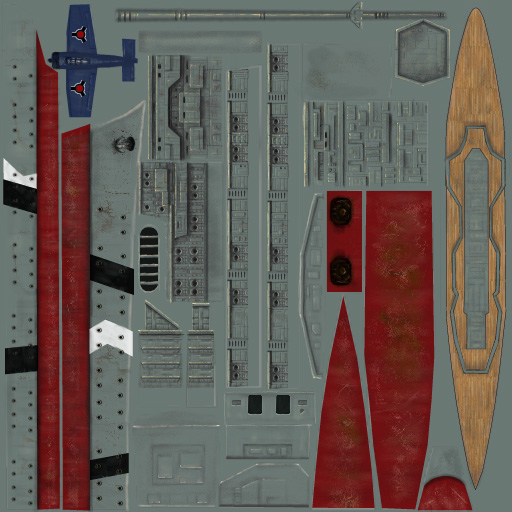 This texture file, from the 'Prinz', was found the original game's directory.

The strange thing is, however, this boat is not found within the game. Unless I’m mistaken and I’ve somehow missed it, even though I’ve carefully logged every single unit appearing then something’s wrong here. Otherwise, it’s possible that this unit was left out of the game during development, although the files weren’t removed. It’s possible that I’ll have to re-run the campaign with the hardest difficulty, although I can’t imagine this would change the outcome at all. What adds to my confusion here is that I remember one of the missions involving sinking a U-boat that had important documents a few years ago, although I do not recall this mission during my recent play-through. This however, may just be my memory playing tricks on me.