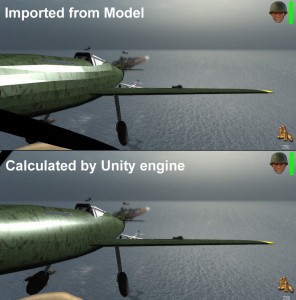 So I was minding my own business, practicing anger management on 3DS Max as half the ‘faces’ of the models are inverted and I have to flip them one by one (not fun when there’s thousands of faces) and tried to experiment with different settings in the Unity engine itself in hope that it could fix what SketchUp seems to export so badly (or incompatibly to 3DS Max, which I use to further refine the structure of the models).

Suddenly I came across normals. I read somewhere that messing with them could possibly resolve my issue. Unfortunately not, but I did stumble across this nice graphical change. Instead of using the ‘normals’ that are saved with the models themselves, I am setting Unity to calculate them for me. This results in much smoother specular lights as well as less shadow bugs which were really bugging the large ships in particular. Also a major victim from this was the BF109G, which isn’t particularly high-poly at the time but still ridiculously ‘under-rendered’, in a way of non-existent English.

As you can see from the screenshot, this really helped the visuals, while leaving the performance exactly the same (as far as I know). Yay!

What I didn’t notice was actually in the screenshot was the new He177, which is completely finished. I’ll post about it tomorrow morning some time, so I can pretend to be hard at work while I get some hard earned rest.