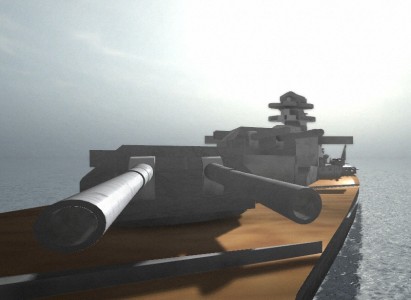 Although officially this mammoth sank about 2 years before this mission occurs, it takes one more terrifying stroll past the player's tiny island.

I had been working on the Bismarck for quite a little while and was experiencing some issues with textures. As you might notice in the above screenshot they’re still fairly low quality which I’ll resolve soon, but at least they’re in place, and after repetitively making its 16 cannons functional, the rest of the ship now does too. This is probably one of the biggest, if not the biggest ship in the game, although the last time I finished the original Operation Blockade missions was a few years ago so I might be wrong. I’ve had some thoughts about a few little additions I will add later (A very nice non-intrusive tutorial system) but these boats and planes are still my first priority.

Bird's Eye View - (Note: The ship isn't that much larger than the carrier, it's just due to the angle of the shot.)

No matter what size any military unit is, if it comes past this island it can be destroyed.

I was going to paste a very nice shot from the player’s perspective but unfortunately the model does still have a few issues regarding some texture faces (in English: Some parts are magically invisible which aren’t supposed to be).