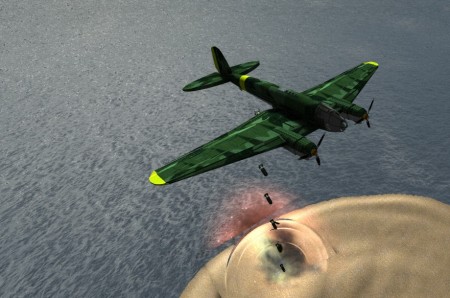 There’s the He111 hard at work at being a nuisance to the player. Now that the light bomber is done, I’ve now got a fair number of vehicles done and I realized that with the current units that I have I am able to complete an entire 18 missions with the units I have so far. The next unit planned is the U-boat.

The downside is, the planes and boats yet to be done are bound to be more complicated, but at this rate I’m still making good progress. From memory, I believe there’s about 4 or 5 planes left and 4 or 5 boats, as well as a revised Panzer tank.

I’m also thinking about spicing up the graphical quality of the environment, and thanks to an update to the game engine I’m using the water is soon going to look even better. As for the rest of the environment, I may begin to work on 3D volumetric clouds, which are going to be really adding to the atmosphere with shadows and lighting.