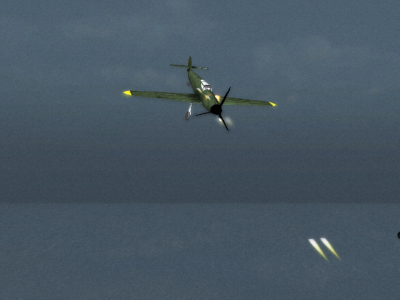 It has been a while since I’ve added in a new unit, and it’s about time I finished the BF109 which I’ve mentioned a couple of times now. It isn’t anything special, and is really just a faster plane compared to the old Ar68 (in very technical terms at least).

Although one of the reasons for the delay is due to me working on fixing up a lot of the other existing planes and boats (improving textures, reworking gun fire, adjusting models, etc.) this hasn’t been the only reason. What you see in the picture above is actually the third revision of the plane model, and even now it still has issues. The propellor head is meant to be completely yellow, as it is in the original game. However it is refusing to change colour, and the propellor itself appears to be one-sided as well. I’ll fix it eventually, but it’s just causing a little bit of a slow down.

Action shot (By the way, excuse the lack of AA from direct editor screenshots)

To counter this, the next unit is the BF109G. Although there’s a few tiny changes here in there realistically in the real thing, the reality in Operation Blockade is that it’s just a faster, revised BF109 with red colours instead of yellow (The red paint makes it faster). This wouldn’t take very long to copy, although I will have to re-assign a lot of values even after simply copying a previous unit which takes about 5-10 minutes at the most.