All guns now have their own associated little muzzle flash. This may not be entirely realistic for some units, but it forms a nice ‘heat glow’ in the distance, so that larger non-muzzle-flash-emitting weapons such as these still look fairly realistic. It’ll be interesting to see what it looks like when I swap the daylight around for some night effects.

Although I haven’t done particularly much today except add on to some visuals to the current in-game vehicles, it does bring it a bit closer to a ‘finishing’ look. Planes make sense, boats make sense, etc. I am pretty close on adding in the BF109 plane as well, although I’m having a few mesh issues with the model here and there. I’m slightly tempted to finish off other parts of the game, such as putting missions in place and testing some multiplayer, finishing additional menus, but I think I’ll wait until I really do have all the units finished. There isn’t an amazing lot more, and the only a few unique units that aren’t very similar to the other vehicles are the aircraft carrier, jet plane (rockets!), V1 rockets and the submarine, which are both very easy to replicate with the plans I have in mind. 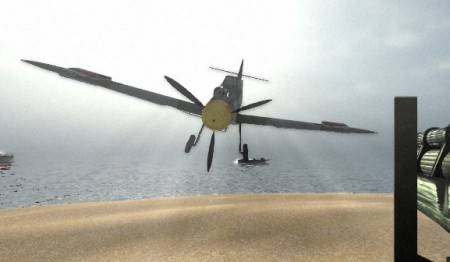 At this rate I may get all units done in, at most, a month or so. Then I can continue on to possibly add multiplayer, which will be my first networking experience with any application so it’ll probably be a complete mess for a while. I might be underestimating the amounts of units to come though, as there’s a fair few to go. I also need to keep in mind I have to finish off all the extra features in singleplayer which consist of additional player weapons, allied support, the map screen, objective missions, grenades, etc.